Our boss Physiotherapist Damian Wyard lent his expertise where it was needed most on Friday Nov 11th 2016, which was Remembrance Day in Canada.

At 8pm that evening, our favourite medical professional was sequestered backstage at the Need for Speed – Hogtown Pro Live Wrestling in Toronto. A raucous show by any account, this night saw fourteen wrestlers compete for various titles and acclaim in a professional wrestling ring erected inside the Super Wonder Gallery at 876 Bloor St West. 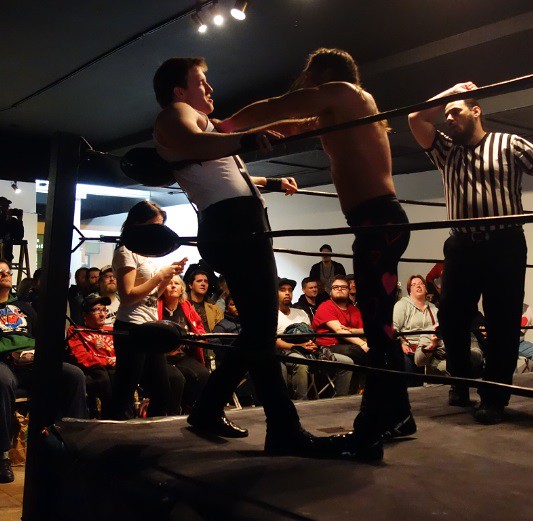 Months earlier, when the administrators of this lively wrestling league reached out and asked for support, Damian agreed to appear and give sports massage to the evening’s most battered athletes. He  volunteered to help out at the wrestling match for free, but was actually paid in vinyl from Sign Source Solution with a small business banner on which our logo was printed.

Earlier that day, miles from the event, more Hogtown Wrestling signs were printed including a new ring apron donated by Dine Palace restaurant guide and other signage for the show. 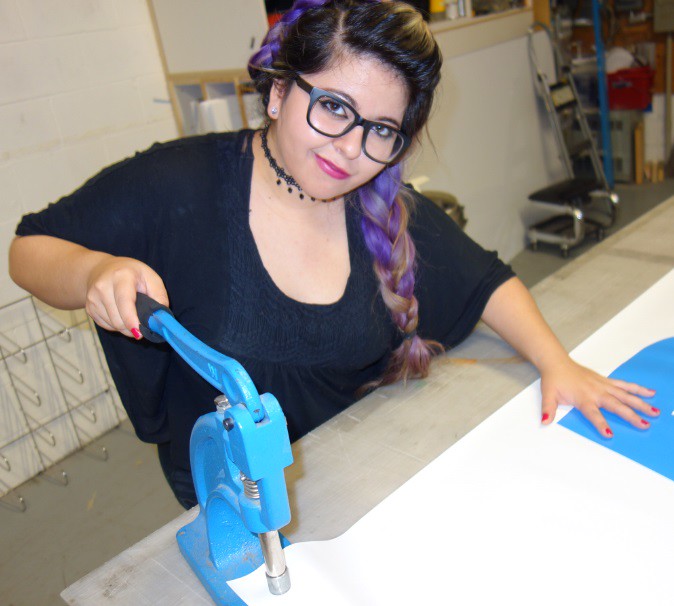 The Pilates4Physio banner required grommets and this author snapped this picture of Thania at work in the shop.

So well organized was the event, everything was thought of and taken care of by sponsors and administrators including free food (wrestlers get free pizza from Amicos Pizza) and beverages for all the performers.  Spoiled sports stars, the wrestlers viewed Damian as just another backstage perk; we heard President Matthew Bradley telling performers that the league was growing in prominence as reflected by the caliber of Pilates4Physio therapeutic assist.

Hogtown Wrestling staff had cleared the perfect spot for Pilates4physio to work backstage in the wrestler’s common dressing room. Administrators had found and cleaned a WWII era massage table for the event. The sturdy antique had been hastily refurbished earlier that afternoon and still smelled faintly of lemon Pledge.  The table was now fully assembled in position under the freshly printed Pilates4Physio sign which was rather gingerly thumb tacked to the wooden wall behind the fabric curtains (completely ignoring the grommets so painstakingly included in the order). 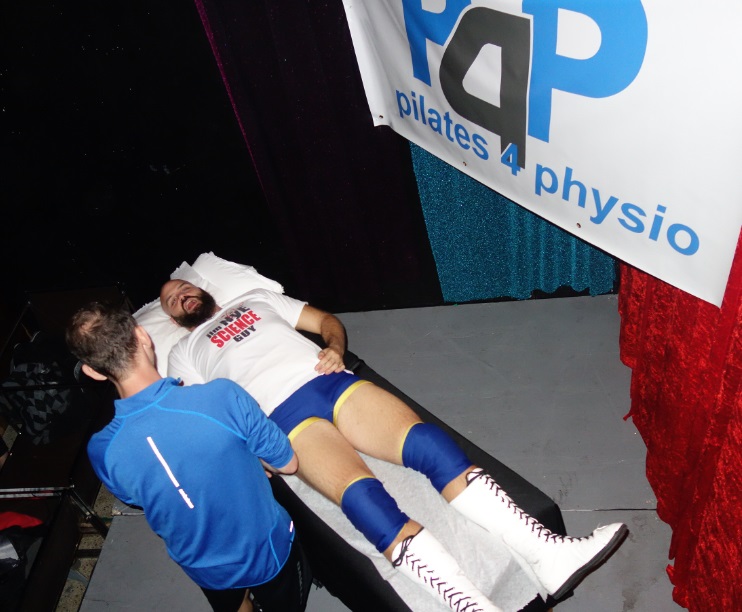 Damian was impressed with the set up. Some nearby risers, cascading in size from large to small made handy shelves on which the medical professional unpacked and assembled his kit.

What Emergency Medical Supplies Would A Dedicated First Responder Bring to a Live Wrestling Event?

While not acting as dedicated medical support, Damian came prepared for some emergencies. He brought clean towels and lotions of course, but also stuck a first aid kit in his bag along with some tenser bandages and other rudimentary supplies. Fortunately none of these careful preparations were required on this night. Most of the guys just needed some post-event sports massage to deal with their over-worked muscles.

At first there wasn’t much to do as none of the wrestlers wanted any attention before their matches. The Hogtown crew are a tight knit group you know, I guess you get that way after the intimacy of the ring, and Damian was an outsider. He looked lonely sitting beside his vacant massage table, but that changed after the first match.
After one warrior was massaged by Damian they all wanted some and pretty soon both the victorious and the vanquished wrestlers would limp backstage directly to the Pilates4Physio table. Another wrestler has some acute lower back pain and was about to go into a fight. Damian’s advice was to fire-up the lower back muscles with some back strengthening to protect it.

Here’s Damian giving some attention to the right arm of Jim Nye the Science Guy who was defeated by the Sumerian Golem. Damian was able to give him some advice on how to strengthen up his forearm tendons due to Tennis Elbow. 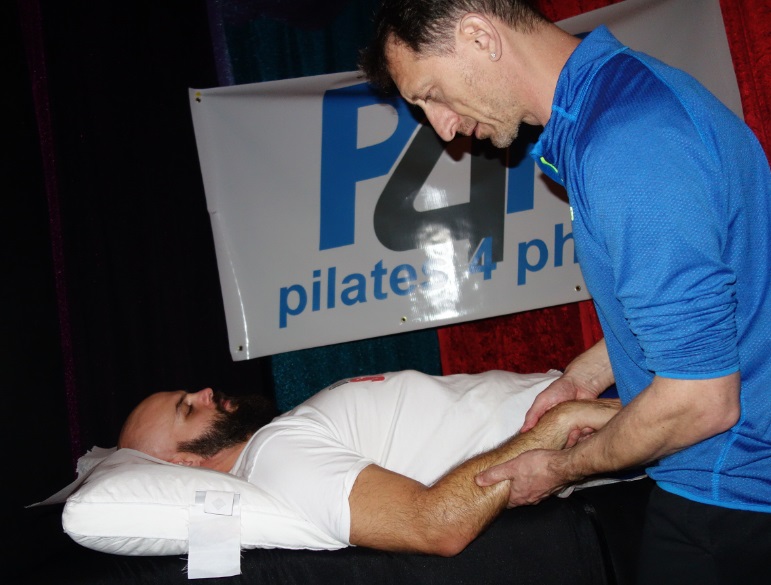 And here is Rob Rage on the table – minutes earlier he survived a desperate struggle with the Dirty Vets who came in from Ottawa. Rob has some old injuries and reconstructive surgeries to his left arm and shoulder. Damian had spotted Rob twerking his arm up the wall, trying to open up some old adhesions. Damian was able to dig in deep and free up his arm more. 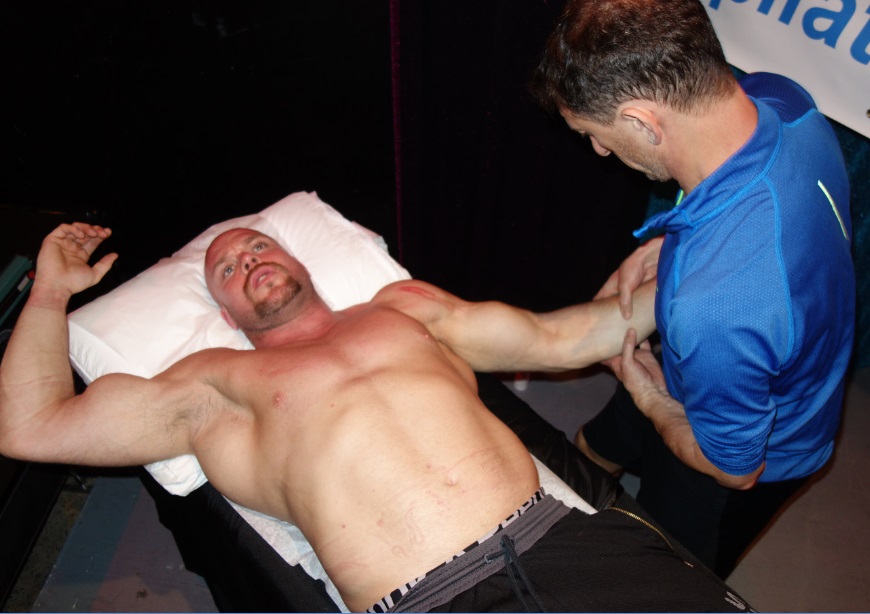 You can read all about the matches on HogtownWrestling com and keep reading here for all the updates on the adventures of Damian Wyard.

Damian Wyard has been a registered physiotherapist since 2003. He has also been teaching Pilates for over 20 years. In his unique practice, he combines physiotherapy treatments with Pilates rehabilitation, using the classic equipment. Damian blends manual therapy, sports massage and Pilates to rehabilitate most musculo-skeletal injuries/conditions. He uses Pilates-based exercise to treat both acute and persistent pain. Damian is always keeping up to date with the research and new skills, so that patients receive the best care. To learn more about Damian, read his full bio here.